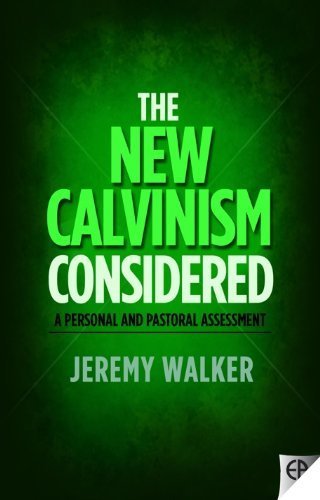 I started this post months ago after reading ‘The New Calvinism Considered: A Personal and Pastoral Assessment’ by Jeremy Walker. The other week I finished re-reading it, this time marking and underlining the text. It didn’t take long to read but I wanted to leave it a little while before writing a review to give some time for reflection. It has proved to be a good decision to wait. This is not the latest book from Pastor Walker but is very current and dare I say relevant. It’s an easy read and a necessary read. There are not too many notes but I would have still preferred them to be footnotes and not the awkward end notes – though admittedly not so difficult for a book of 126 pages in total. The cover is fairly plain (my son is an Illustrator) but don’t be misled into thinking this is a bland book – it isn’t.

Once you launch into the book, if you are expecting a very precise categorising of ‘The New Calvinism’  in a 1. 2. 3. style you will be disappointed. Jeremy goes out of his way to show how this movement is not so easy to label. It’s a broad spectrum, like the meaningless term ‘evangelicalism’. Though you would think the word Calvin does narrow it down a bit – but not too much.

The first chapter goes through the movement seeking to be as generous as possible. And I can see how Jeremy could come in for some criticism here. Rather than go for the theological jugular, he finds points of agreement or aspects of the movement that are to be commended. Not everyone appreciates this approach. Don’t be mislead though, In terms of sheer page numbers the difficulties with the movement take up more than any other section.

I’m glad of reading it through twice because my thinking has crystallised somewhat. I couldn’t have made some observations by simply reading and then commenting straight away. I have no idea generally how the book has been received. I believe it has had some good reviews. But here’s some questions I was asking and I’m not at all sure what the answers might be!

I heard that one Church examining The New Calvinism decided to use a different book on the subject because Jeremy doesn’t draw the line clear enough. Make no mistake, this book covers a lot of ground mentioning several names. It’s good to be loving, it’s good to be charitable, it’s good to look over one another’s faults and we must do all of those. But what’s the point of holding any truth at all in that case. There is an attitude out there for example about Mark Driscoll: because some of his sermons are powerful exhortations to Godly living and the clear call of the Gospel is sounded he should be given a free pass. My question again about this particular position is why believe anything? Don’t get me wrong we need loving charitable Godly people and they are without doubt a blessing to the Church but someone has to stick their head above the parapet and be ready to get shot – and in the case of Jeremy, shot by both sides!

The Sovereign Grace scandal has continued to rumble on sucking others into the vortex. I wouldn’t like to make a correlation between that and the New Calvinism though. This is affecting The Gospel Coalition.

The issue of Antinomianism is also rumbling on. Tullian Tjvidian is mentioned by name. Since first picking up the book I heard him interviewed by Janet Mefford and Chris Rosebrough because of his move away from The Gospel Coalition. Chris aired one of Tullian’s sermons asking, is Tullian an Anti-Nomian? On that sermon – definitely not.

Jeremy calls for a fully worked out Doctrine of the Church, Belief and application of the Confessions, Evangelism, Sanctification and Worship. Unless a person is already on that wave-length and willing to start thinking confessionally it will mostly wash over them. For this reason I jotted some questions down that would be worth asking any Evangelical Church. How seriously should we take this book and what it is saying? How should / does this affect our / your Church? My suspicion is that in the age /aim of ‘niceness’ the book will be largely passed over and the huge points Jeremy makes will be ignored. A bit harsh you say – time will tell.

I don’t mean to use ‘Sacred Enclave’ pejoratively but that is probably the group that will benefit most from the ‘Trumpet Sound’ from this book.  I’m probably in that group myself. Recent experience has demonstrated the truth ‘you can lead a horse to water, but you can’t make it drink’ quite powerfully.  I don’t mean we should be looking in a hyper-critical manner at everyone to see if they pass the test of Orthodoxy. But I repeat, if there’s no intention of doing anything at all what’s the point in believing anything.

All in all I found it to be a helpful and informative book. But unless the thinking  behind the book is your thinking it will sadly have little impact. What the answer is I have no idea. Jeremy wrote the book partly because he was asked to and out of Pastoral concerns (clue is in the title) not because he wanted make a name for himself.

I absolutely recommend this book. However, unless you are already Reformed (I include Reformed Baptist) or heading towards being Reformed the book will be lost on you. May the Head of the Church use this book for His Glory.