So yesterday I decided to take a trip to the great metropolis of Bulkington where Jeremy Walker was giving a lecture (at Bulkington Congregational Church) on Henry Havelock. The full lecture title was (Follow link to listen) ‘Henry Havelock – Every inch a soldier and every inch a Christian.’ Here’s what I thought was a key quote (there were many more!) Havelock had ‘An unfashionable faith in an unsympathetic environment.’ And another, one viewed him as ‘Being ready to live or die.’ Jeremy gave an account of his military life. He wasn’t in a position to buy his way up the ranks so any promotions he did have were on his ability as a soldier. Promotions were for specific campaigns but these were short lived and he found himself dropping back down the ranks when his usefulness was over. Nevertheless he did make progress, but it was slow and over many years, unlike some of his contemporaries. Eventually, but after many years, his service was recognised. His Christian faith was a particular barrier to promotion. On top of that he was a Baptist. Interestingly, while in India he met Adoniram Judson – the Baptist missionary.

We were then treated to how his Christian faith fitted in with being a professional soldier. This was just great. But extremely challenging to each of us to be the very best we can be in whatever vocation God by His providence has placed us. He was respected by all even when they thoroughly disliked his Christian faith. His practice was to spend the first two hours of every day in private prayer and reading his Bible. If the column of troops had to leave at 6:00 he would rise at 4:00. If they had to move at 4:00 he would rise at 2:00. This was his daily practice as a Christian and he would not be moved. Unflinching commitment to his Saviour and to his craft as a soldier. Disciplined and professional to the very end.

That is just the briefest account of what was an excellent and challenging lecture. Jeremy delivered it with suitable humour in places and with the utmost respect for this man of God. We can all learn from Henry Havelock and his devotion to The Lord Jesus Christ and his service as a soldier, but I think servicemen or retired members of the armed forces will especially appreciate this lecture.

Christians are finding as Sir Henry found, we also have ‘An unfashionable faith in an unsympathetic environment.’ I enthusiastically commend the lecture to you.

We read this from Wikipedia: ‘Major General Sir Henry Havelock KCB was a British general who is particularly associated with India and his recapture of Cawnpore during the Indian Rebellion of 1857.’ 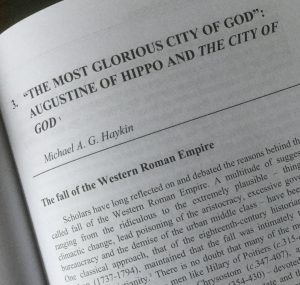 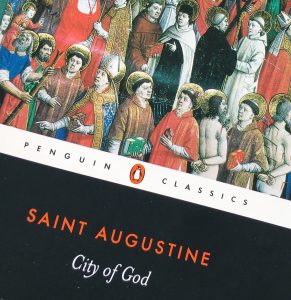 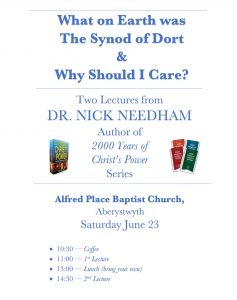 Dr Nick Needham will be coming to Aberystwyth Saturday 23rd June to give two lectures on The Synod of Dort.

If you are in Aberystwyth do come along. The lectures will take place at Alfred Place Baptist Church. Coffee at 10:30.

Dr Needham is the author of ‘2000 Years of Christ’s Power‘ currently in Four Volumes.

Volume 1. The Age of the Early Church Fathers

Volume 4. The Age of Religious Conflict

If you can make it, it would be great to see you. Andrew lectured for many years on Church History at London Theological Seminary. He has Pastored several Churches here in the UK, Australia and New Zealand. Though retired, he now has a much appreciated itinerant ministry.

I’ve been a bit slow in posting this but Geoff’s lecture is available from the website at Bulkington Congregational website and eventually at my own website.

The lecture was given by Geoff in his own unique way – warm and homely, yet packed full with lessons and exhortations to the church of our own day. There were a number of people at the lecture that attended Westminster Chapel and went to the Friday bible studies. And one friend that did attend Westminster testifies ‘that God was in that place’. And by that he means in a way that is not apparent today.

A service of worship isn’t like anywhere else and it shouldn’t be like anything else. There should be a sobriety when gathering to meet with God yet with deep thankfulness at the privilege of being able to worship this awesome God. This is the God, the true and living God, that sent into this world of sin His only Son to die and rise for sinners.

Listen to the lecture. Go HERE. You know what to do.

Here’s a great Reformation Gift via Jim over at Domain for Truth. Enjoy!

Free ITunes University Lecture: The Reformation by Carl Trueman | The Domain for Truth.

We have three excellent lectures lined up for 2015. To whet your appetites here are the details.

20th April 2015
Austin Walker
‘How Pure is the Church? – Augustine and the Donatists’

Andrew Davies is a retired Pastor  with an itinerant ministry and was also a Lecturer in Church History at London Theological Seminary.

All lectures are on a Monday evening at Bulkington Congregational Church and start at 7.30.

I’ve been a bit remiss and neglected to post a link to the last lecture of 2014. Austin Walker was unable to give his lecture (see next post) but Dr Lesley Rowe ably stepped into the breach with her excellent lecture on Arthur Hildersham & the Plague Summer of 1625.

The parallels between then and our own day shouldn’t be lost on the hearer. Here’s the link – enjoy!

There’s been a change to our lecture for 28th April 2014. Austin Walker will now be bringing his lecture on the Donatists next year. We have three lectures for next year and full details will follow shortly.

Our last lecture then for this year will now be given by Dr Lesley Rowe on the topic “Arthur Hildersham and the Plague Summer of 1625”.

Some may have previously heard Dr Rowe on this subject, but I’m reliably informed that this is a new lecture with new material. Dr Rowe’s PhD thesis was on ‘The worlds of Arthur Hildersham (1563-1632)’ and there’s a favourable review of her book ‘The Life and Times of Arthur Hildersham‘ in Evangelicals Now by Dr Robert Oliver.

My appetite is now wetted and I’m really looking forward to the lecture. If you can make it to Bulkington Congregational Church on Monday 28th April, 7.30 it would be great to see you.

The MP3 Audio of the  History Lecture ‘Thomas Boston (1676-1732) anticipates the death of Queen Anne’ is now available.

The more I think about it, the lecture was not only a great encouragement, but also very challenging. This is a major purpose of the lectures. It’s not just an opportunity to stuff our heads full of facts – as useful as that might be. But we do see through the lives of Christian men & woman of the past how God has kept them and how in the case of this lecture stepped in providentially to preserve the Church. To have some knowledge of history is really important. I remember a few years ago inviting Iain Murray to come and lecture – he replied ‘are Christians interested in history?’. Quite an indictment, one wonders sometimes.

The lecture spoke powerfully, I thought, into the present situation of the Church. Powerful people die, sometimes unexpectedly. The death of Queen Anne was hugely significant as you will hear. I commend this and the other lectures to you.

The lecture can be downloaded HERE.

Visit my Website for many other history lectures HERE