Very difficult to think of a title for this post. But I’m continuing to listen to this abridgement of Aleksandr I. Solzhenitsyn’s ‘The Gulag Archipelago 1918-1956: An Experiment in Literary Investigation.’ Narrated by, I believe, his son which lends to it a certain poignancy.

Listening to this is relevant to the book I’m reading by Rod Dreher, ‘Live not by lies.’ The title of Dreher’s book is from the writing of Solzhenitsyn. Reading about Communism in Dreher’s book isn’t quite the same as listening to the writing of someone that lived through its horror. The quote below from Solzhenitsyn puts some realism into our current situation and is really helpful as I read Rod’s book. The section is where Solzhenitsyn is describing what happened to Russians that were taken prisoner. I already knew this but to hear it narrated is quite different. Simply by coming into contact with The West was enough to get you imprisoned on your return home (In chapter 6 of The Gulag ‘That Spring’). Or even shot. It didn’t matter if you had defended Russia or were decorated. It was all stripped away in the name of the ideology. You were an enemy of the State. All that was necessary was that you confess your crimes. 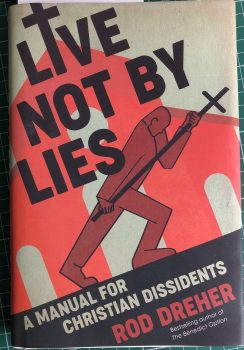 Dreher describes the Totalitarianism we are experiencing as ‘Soft Totalitarianism’ but make no mistake it’s the same ideology. Aleksandr Solzhenitsyn was a Captain in the Russian army. During his imprisonment he encountered other soldiers, like himself, decorated soldiers, but it didn’t make any difference. They were now an enemy of the State all the same.

So here’s the quote:

‘The West simply had to understand that Bolshevism is an enemy for all mankind. But The West did not understand at all! (from Ch 6)’

That quote, especially if you listen to it in context, is incredibly powerful. The young, it seems, and other Social Justice Warriors (SJW) want to play or experiment with Communism. They think it’s a good idea. But to repeat the quote from Solzhenitsyn ‘the West did not understand at all.’ Call it Wokeness or SJWism if you like. Whatever we call it let’s listen to Solzhenitsyn and realise ‘that Bolshevism (or soft totalitarianism) is an enemy for all mankind.’ It’s an enemy to us all. Including those trapped by it. The West still doesn’t understand.

What’s interesting for us is that we can see this at work today. For example, a person aligns themselves with the leftist Woke ideology. They like to display their credentials. Or businesses do the same. But they happen to comment, for instance, that because someone ‘identifies’ as a man or woman it doesn’t make it so because the biology says otherwise. They are still a man or a woman however they might ‘identify.’ We know these cases. That is enough. You are condemned. It’s like a Russian soldier coming into contact with The West. The retribution is merciless and swift. You are cancelled. Yes, the Soft Totalitarianism doesn’t put a bullet in your brain, or throw you in the Gulag, but its aim is to destroy you. It’s truly Satanic. It’s from the same source. (You can read about many of these cases in Douglas Murray book ‘The Madness of Crowds.’ Or consider J. K. Rowling (See here for the latest attacks) or Martina Navratilova.)

I’ll continue to listen to ‘The Gulag’ and to read ‘Live not by lies.’ Maybe a ‘review’ or some comments later. We really need to be equipped not only to spot it but to defend against it and where possible rescue those from its grip. Not everybody on ‘The Left’ is our enemy. When it comes to Free Speech we (Christians) can find ourselves standing with surprising allies. They are our friends. But ultimately without Christ they are still lost. They might not be in the grip of Wokeness, but they are still lost. They need the Saviour too.