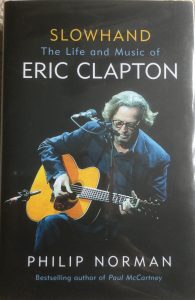 This year I’m trying to read a few non-Christian books. ‘Slowhand’ was on display at the local library, so I decided that it would be a good book to read. Slowhand: The Life and Music of Eric Clapton by Philip Norman was published last year (2018), so is nicely up to date. I finished it a few weeks ago but as far as the readability goes, it’s easy going and I enjoyed reading it. The text is a nice size and the chapters divide up into easy chunks and are not too long. There’s even an Index (and I used it). As I go through the book I note the dates and think how old I was and what was going on at the time. For example, I was at the Rainbow Concert after just turning nineteen. I didn’t become a Christian until I was 25.

I’ve not picked a guitar up for nearly 40 years, and most likely won’t again, but I remember back then having very heated discussions in the pub over who was the greatest guitarist. At the time (early 1970’s), for me, it was Jan Akkerman (Focus). There were a lot of contenders, so Clapton was probably one of them. I do recall the ‘Clapton is God’ label. There are several songs that I really like. For example White Room, Bell Bottom Blues, Crossroads, and Sunshine of Your Love and even though I heard a lot of his music I never actually owned any of his albums (including Cream) until I recently bought a Best of Eric Clapton CD. I suppose, for me, and it is a matter of taste, the Blues is not my favourite style of music, although I appreciate it when it’s done well. In the Blues genre, Clapton is definitely one of its great exponents and I do like a lot of it.

The book starts with Eric in a Service Station with George Harrison. Initially, I thought it was going to miss his childhood but the author then takes us back to when Eric was born in Ripley. His early childhood, or the effects of it anyway, feature throughout his life. His mother left him when he was two. He thought his mother was his sister and his grandmother was his mother. He found out the terrible deception when he was nine. His grandmother Rose, spoilt him rotten (and continued to do so) and so consequently spoilt him.

Thankfully, there are no graphic descriptions but pretty much everybody, perhaps especially Clapton, lived totally promiscuous lifestyles: even when they were in ‘proper’ relationships or were married. It becomes a bit wearisome to continually read about his constant state of drunkenness or drug abuse. But that was how it was and the author faithfully records it all, while (most of the time) avoiding too many value judgments. There is some strong language in the book but It’s kept to a minimum and isn’t gratuitous. My language was quite extreme before becoming a Christian so to me it’s all quite tame.

I wondered if Clapton came into contact with Christians. He was brought up in a culturally Christian environment, as I was, so he would have some vague knowledge of the Christian faith. Vague knowledge, however, is most often completely wrong. After thinking about that the very next chapter found him undergoing radical treatment for his drug addiction by Christian doctors. The nurse was fired though because her evangelism was a bit too ‘full on’.

The temptation is to be judgemental about him and think of him as a spoilt brat (which he was) who seemed to get away with just about anything and everything (which he mostly did) whilst in the main avoiding the carnage he created for others around him. The way he treated the women in is his life is appalling. So appalling that it becomes impossible for the author not to say something. As the saying goes, however, ‘there but for the grace of God go I.’ No matter how much money or talent he had, ultimately, it couldn’t protect him from himself or later tragedy. It’s quite amazing that he has survived as long as he has. So many of his musical peers died while young.

He becomes a father and this finally begins to wake him up to some responsibility. And then tragedy strikes. In just one short paragraph (one sentence really) Norman writes about the death of Connor, Clapton’s four-year-old son. What happened is jaw-dropping. It stopped me in my tracks. So, so, sad.  The service was held in Ripley. I’ve no idea what Christian content there was at the funeral apart from the set C of E service.

In Christian circles, you hear the phrase ‘I don’t know how I’d cope if I weren’t a Christian. But people do. And sometimes they cope rather well. It’s not a phrase I like, even though I understand what’s meant. Clapton appears to change after this. He quits the drugs and the drink and takes control of his life. The last two chapters, I thought, were a bit rushed as we read that his grandmother Rose eventually dies, as does his mother, probably the two most influential people in his life. And so here we are in 2019 and Clapton is still playing. He survived. That is remarkable.

I’d definitely recommend reading it. Especially if you are a fan. I think it was good for me to read it.