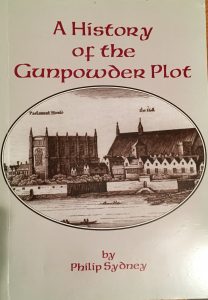 My second (of three now) book on the Gunpowder Plot has the catchy title of A History of the Gunpowder Plot by Philip Sydney. If I have it right this was published in 1905 – 300 years after the plot – by Protestants Today. I bought it for £5.95. There are few illustrations and no sub-headings to speak of and so the reader is confronted with page after page of dense text. Mercifully the text type is easily readable and most of the chapters are short. Every chapter has quite a few endnotes which need to be read. There is no index and no bibliography. Not a particularly inviting book – so probably a book of its time. Very plain.

Perhaps mistakenly, I read a few reviews on Amazon that said it was dry and difficult reading. One ‘reviewer’ didn’t finish it. If I’d taken any notice of their reviews it would have stayed on a shelf in the Christian Bookshop. I obviously took no notice of them and bought it anyway. But given my comments above and the reviews I can see what they mean.

But, I really enjoyed it. I think I must be weird! The book has no Evangelistic emphasis (as the previous book) and has no real context other than a few meager references as you move through the book. What I’m enjoying though is all the detail – another thing the ‘reviewers’ didn’t like. There are a lot of quotes from the original case and a number of letters are included.

Sydney is quite upfront about his own belief that ‘it was a put up job.’ The Government (that is, Robert Cecil – Secretary of State) it seems had all the main players on a ‘watch list’. It’s extraordinary the plotters thought they could get away with it, and even when the game was up they still thought they could stage an uprising in the Midlands. There are a few references to Dunchurch, Rugby (where I grew up), and several other places I know well. Dunchurch is built around a crossroads with a couple of historic Coaching Inns and a house (then The Red Lion Inn) that apparently was where some of the plotters met. I knew a guy some years ago that lived there and have been in the house. Sadly, at the time I had no interest in any of this – a shame that. Next time I’m in Dunchurch I’ll get a few pictures.

The propaganda value of gruesome public executions seems quite obvious – especially if the authorities knew all the time. Some things don’t change. Although, the plot itself, had they actually pulled it off, would have changed the country. It was of epic proportions. But it failed. Thank God.

The historic controversies (so I have learned) concern when the authorities (Cecil) knew of The Plot, the delivery of a mysterious letter to Lord Monteagle (or Mounteagle) warning him to stay away from Parliament on November 5th and whether the Jesuit hierarchy also knew of The Plot. Sydney deals with these and drops in his disagreement with other views as he goes along. The book seems quite thorough and as far as I can tell he argues his case.

The whole thing is an incredible story. I suppose there is always going to be room for conjecture on some of the issues but Sydney quotes from primary sources – letters, trial transcripts and secret transcripts between prisoners in The Tower (that is, The Tower of London). I need another visit to the Tower myself now after reading about The Plot.

Do I recommend the book? If you get hooked on the subject, then yes. If you are a history buff, yes. Otherwise, I think you’ll survive without reading it. But:

The whole episode raises enormous questions, especially about propaganda, freedom of religion, security and torture as a means to elicit information. And so in that sense reading of The Plot is ever relevant as we face those very same questions in our own day.

So I have another book to read on The Plot that will be a bit more demanding. I’ll do a post in due time.