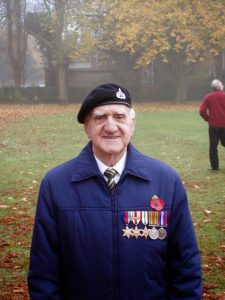 Dad didn’t say too much about the war. I understand that. But I do wish he’d said more. I should have asked more. When I bought a Poppy this year I said my Dad served in WW2. I was asked if he came through it (WW2) unscathed. He didn’t lose a limb if that’s what was meant. But he did have health issues (bronchial problems) throughout his life because of it. He lost all his teeth as well because of it. I can also remember him having awful nightmares. As a young boy, I would hear him wailing in the night. So no, he didn’t come through it unscathed. And I doubt many, if any, did. 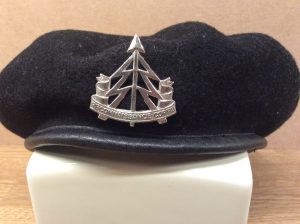 He served in the Reconnaissance Corps and two requirements (apparently) to be in the Corps were intelligence and aggression. I reckon those two characteristics served him (and others) well. The motto of the Corps was ‘Only the enemy in front.‘ Four stories he did tell me were these. No details. He told me how on one occasion a patrol went out but only one person came back. The man that came back was a Christian. I don’t know what that (Christian) meant. But it obviously affected him quite deeply and he never forgot it. Another time he was due to go on a troop ship but for some reason, he didn’t make the boarding. The ship was sunk and everyone on board died. Then he was on his bike (he was a dispatch rider) going from one side to another and had to ride across a ridge. Enemy artillery had targeted the ridge and as he went along shells were exploding behind him but he made it without being hit. One other incident was how he rescued an officer on the back of his bike. No details just the fact of it.

He always bought a Poppy and would watch the Remembrance Day service on TV but never attended any reunions and never joined the Remembrance Day parade. I think it was all too much for him. The memories were so awful. His medals were in a box in the cupboard. But many years later as a Christian, a serving soldier (weapons Instructor) in the Church encouraged him to get his medals mounted and join the Remembrance Day parade. And he did. So thanks Ian Fraser for encouraging him to do that. I was able to watch him march with other WWII veterans. I watched him with pride. I guess I didn’t think too much about it when I was younger but today I’m thankful for his service. And all those that served – many paying the ultimate price. Thank you for your service Dad.

Whichever way you look at it, war is a terrible thing. A necessary thing sometimes maybe, but terrible all the same. As veterans die there’s a renewed realisation, it seems, that we ought not to forget their service and the horror. The war to end all wars (WW1) left the door open to another one. And so conflicts continue around the world. There will be wars, and rumours of wars, until the end said Jesus (Matthew 24:6). And so it is until The Prince of Peace Himself comes to reign.

A much more significant event, even than the war, happened to Dad as an older man. I think in his late fifties. This was when his life came under a new command, The Lord Jesus Christ. When the Lord Christ appeared to Joshua,

Joshua went to him and said to him, “Are you for us, or for our adversaries?” And he said, “No; but I am the commander of the army of the LORD. Now I have come.” And Joshua fell on his face to the earth and worshiped and said to him, “What does my lord say to his servant?” (Joshua 5:13-15)

My Dad, by the Grace of God, bowed the knee to Christ. Not an easy thing for him to do as a very self-sufficient man. People say ‘look at all the suffering in the world, I could never become a Christian.’ This is just an excuse to not bow the knee. My Dad saw a lot of suffering. He saw friends blown up and lots of death and destruction first hand. And yet, my Dad came to see that he was a sinner in the sight of God. He came to know the Christ he had rejected for most of his life. My Dad’s favourite hymn was:

‘I have a friend, whose faithful love
is more than all the world to me,
’tis higher than the heights above,
and deeper than the soundless sea;
so old, so new, so strong, so true;
before the earth received its frame,
He loved me – blessed be His Name!

You might have seen the following words, or similar, on a War Memorial. But did you know they were from The Bible? ‘Greater love has no one than this, that someone lay down his life for his friends.’ John 15:13. Jesus laid down His life. But Jesus laid down His life to take it up again. Only Jesus could say this, and then do what He said. ‘No one takes it from me, but I lay it down of my own accord. I have authority to lay it down, and I have authority to take it up again. This charge I have received from my Father (John 10:18).’ He also said in John 10:27  ‘My sheep hear my voice, and I know them, and they follow me.’

Before they died, my Dad and Mum came to know and follow this risen Lord Jesus Christ. Have you?