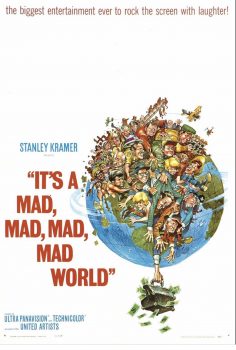 The Madness of Crowds: Gender, Race and Identity, Douglas Murray, Bloomsbury, 2020. This is the updated & expanded edition.

Have you ever seen the 1963 film ‘It’s a Mad, Mad, Mad, Mad World’? It’s a totally crazy film with big stars in it all searching for buried loot under a ‘Big W.’ It’s a comedy and is hysterical. It’s very funny.

This book by Douglas Murray plunges us into a mad, mad, mad, mad world as well. There’s a lot that’s hysterical. But it isn’t funny. At all. There is a ‘Big W’ though. And an elusive prize.

I didn’t take any notes. I simply wanted to read it. I think the book will make a good companion to Carl Trueman’s latest book (started but not finished).

On the cover of the book is the line: The Sunday Times Bestseller. This is rather surprising because, I assume then, someone is buying it. I did. Presumably lots of people are buying it – not sure if they’re reading it though. Murray was initially encouraged by this. But in the afterword of this edition he’s rather more pessimistic. The frightening aspect of the book is that you can be anything you want to be by ticking the appropriate ideological box. And this is the message: we (that is, most people) are being coerced (or simply marinated) into an ideology. We are being forced further into an ideology that divides. You capitulate or else. In fact, it works the other way as well. You can be told what you are as well. So a black man can be a white man if he doesn’t get with the program. The whole idea of black, white, man, woman, boy, girl is an utter mess of confusion and cancellation. Murray has provided us with enough evidence (all cited in the end-notes) to convince anyone, that wants to step back and see, that what is going on is complete madness. 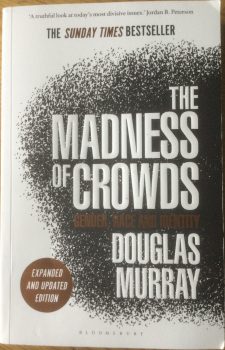 The chapter on Race is the longest – just. The chapter on Trans is the saddest. The whole book is fairly tragic though. At the beginning of the book he explains the difference between what he calls a Hardware or a Software issue. It recurs a few times through the book.

‘…. the contemporary world has begun to settle on a morality which roots itself in this dispute and which may be viewed as a hardware versus software question.
Hardware is something that people cannot change and so (the reasoning goes) it is something that they should not be judged on. Software, on the other hand, can be changed and may demand judgements – including moral judgements – to be made. Inevitably in such a system there will be a push to make potential software issues into hardware issues, not least in order to garner more sympathy for people who may in fact have software, rather than hardware, issues.’ p.29.

I do think there are some conditions that might be described as a ‘Hardware’ issue simply because we live, according to the Bible, in a fallen world. We should expect to find things that don’t fit. For example Murray gives some figures for people with Intersex (formerly Hermaphrodite) that might be a ‘Hardware’ issue. I’m not convinced surgery is the answer though. It’s all very sad. Help is definitely needed but it’s coming from the wrong place. Everyone has an inherent worth and dignity because we are all  made in the image of God our creator. Everyone. Just like me they need the love and grace of God not an ideology.

I wasn’t sure quite how to read those figures but according to one website I looked at there’s about 1.4 million intersex people in America. That sounds like an epidemic to me. But it depends where you are on the trajectory and also on who decides where you are. Some of the people that decide, frankly, should be prosecuted for child abuse. It’s not science or health care, it’s ideology. It’s all in the book if you can stomach it.

I’ll quote below a couple more sections from the conclusion to give you a flavour of the book.

Because the most extreme claims keep getting heard, there is a tendency for people to believe them and their worst-case scenarios. p.242

‘With each of the issues highlighted in this book the aim of the social justice campaigners has consistently been to take each one – gay, women, race, trans – that they can present as a rights grievance and make their case at its most inflammatory. Their desire is not to heal but to divide, not to placate but to inflame, not to dampen but to burn. In this again the last part of a Marxist substructure can be glimpsed. If you cannot rule a society – or pretend to rule it, or try to rule it and collapse everything – then you can do something else. In a society that is alive to its faults, and though imperfect remains a better option than anything else on offer, you sow doubt, division, animosity and fear. Most effectively you can try to make people doubt absolutely everything. Make them doubt whether the society they live in is good at all (and it’s working – my comment). Make them doubt that people really are treated fairly. Make them doubt whether there are any such groupings as men or women. Make them doubt almost everything. And then present yourself as having the answers: the grand, overarching, interlocking set of answers that will bring everyone to some perfect place, the details of which will follow in the post (in other words there is no answer – my comment)’ Pp. 247-248.

Given the hot-button topics I thought the book is written quite sensitively. It’s not an aggressive book, but unfortunately what Murray can’t give you, and to be fair he doesn’t try, is any hope, or an objective truth claim to base that hope on. I don’t think he’s saying there’s no such thing as truth, I’m fairly sure he would say there is, but he can’t base it on anything. If there’s no God of truth, there can’t be any truth. The Lord Jesus said ‘I am the way, the truth, and the life.’ And so as Christians our hope is in God – the God of the Bible. But we do have to reach people with the Gospel of Christ; a world that is perishing and drowning in its own particular madness. This book describes the world, or some of it anyway, that desperately needs the Gospel.