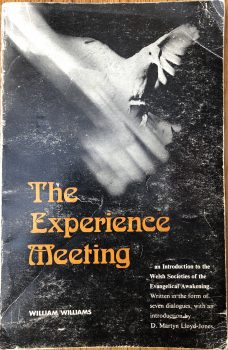 This is part three of sections from Chapter 1 of William Williams ‘The Experience Meeting.’ (Part 1 here & Part 2 here)  Note the condition of the church when the Spirit of God visited in revival blessing..

What follows is a description of what most of us have no personal knowledge of: when the fire falls upon His people. What’s so encouraging is that these believers were in such a low spiritual state. God visits us when He chooses to do so. Not because we’ve reached a point where we might be tempted to say ‘God will bless us now.’ The Christian faith is not a works based religion. It is Grace based, not merit based. Our merit before God is found in another. Namely in the Son of God – The Lord Jesus Christ. It does not give us licence to live how we choose, but at the same time our living is not meritorious. We do not earn Gods favour. How we should know the reality of the phrase ‘we are unprofitable servants (Luke 17:10).’

EUSEBIUS continues…. ‘But at last, forced by cowardice, unbelief and the onslaughts of Satan, we resolved to give up our special meeting; and now we were about to offer a final prayer, fully intending never again to meet thus in fellowship. But it is when man reaches the lowest depths of unbelief that God imparts faith, and when man has failed, then God reveals Himself. So here, with us in such dire straits, on the brink of despair, with the door shut on every hope of success, God Himself entered into our midst, and the light of day from on high dawned upon us; for one of the brethren – yes, the most timid of us all, the one who was strongest in his belief that God would never visit us – while in prayer, was stirred in his spirit and laid hold powerfully on heaven, as one who would not let go.

His tongue spoke unusual words, his voice was raised, his spirit was aflame, he pleaded, he cried to God, he struggled, he wrestled in earnest, like Jacob, in the agony of his soul. The fire took hold on others – all were awakened, the coldest to the most heedless took hold and were warmed; the spirit of struggling and wrestling fell on all, we all went with him into the battle, with him we laid hold upon God, His attributes, His Word and His promises, resolving that we would never let go our hold until all our desire should be satisfied.’

The Experience Meeting: An Introduction to the Welsh Societies of the Evangelical Awakening, William Williams, Evangelical Press, 1973. Pages 8 & 9.

I’ll leave it there and continue the narrative with another post – maybe two more. My desire is simply to encourage us all in the Lord (1 Thess 5:11 & Heb 10:25).

We all went with him into battle

I like the phrase ‘we all went with him into the battle.’ I don’t think that means everyone was praying at the same time or that everyone prayed. But that when one prayed, all prayed (Acts 4:24). Such was their united assault upon the throne of Grace. That’s the sort of unity we want in our prayer meetings.

It’s a fine line, perhaps, between not despising the day of small things (Zech 4:10) and the realisation that without God we are sunk. God is at work. He does not stop working. The Lord Jesus is building His church (Matt 16:18), and He will continue to build it until He returns. He gives us persevering grace. We are not fallen away because He keeps us in the way. For this we are thankful and raise our Ebenezer (1 Sam 7:12). But we pray: “Lord, give us that longing we know we need.” ‘O, that Thou wouldest rend the heavens and come down (Isaiah 64:1)’ and ‘that glory may dwell in our land (Ps 85:9).’

I read this book years ago, and one particular section especially was impressed indelibly upon my mind. And I always tend, somehow, to make reference to it when talking about revival. Which I did do just recently. It’s about time then, that I typed that section up. It’s fairly lengthy for one post so I’ll break it up into three or four shorter posts. (Part 2 here & Part 3 here) Any highlights in bold or italics will be mine.

I don’t know if the book is still in print. Whether it is or not doesn’t really matter. What the book, or this section anyway, tells me is that no matter how lifeless we think our prayer meetings are, and let’s face it, they mostly are, the Lord is well able to visit us and revive us. We don’t need to gee them up and try to inject life into them. We simply need the Lord to visit us. That’s the only life we need. His life. The Spirit of God. Our hope is in God. Williams writes the book as a conversation or dialogue between two people, Theophilus and Eusebius. Here’s the first of the quotes:

THEOPHILUS: And now, what progress is the Lord’s work making in your country? I have heard that the gospel of Jesus has reached you, and has begotten many sons. Will you please tell me how grace began to work there? By what means? And with what power? And to what extent apart from the usual means? And which graces appeared first? What wiles has Satan devised to hinder the work? And what troubles or trials have you suffered to test and strengthen you and to purify you?

EUSEBIUS: You have asked me many questions, and I will do my best to answer them all, for I find nothing sweeter to recount, and nothing to quicken my soul more, than to remember the days of the Lord’s visitation to me and to others in the day of my betrothal to Him, the joyful day of my heart; to remember that time, to me, is ever as sweet as honey (This is the first paragraph of a long section).

The Experience Meeting: An Introduction to the Welsh Societies of the Evangelical Awakening, William Williams, Evangelical Press, 1973. Pages 7 & 8.

I can’t recall where I read it, but in one of Jonathan Edwards books he talked about how through remembering and talking about past visitations of God those same feelings can come back. I don’t think Edwards was speaking negatively here, but speaking experientially. Hence we read above: ‘to remember that time, to me, is ever as sweet as honey.’