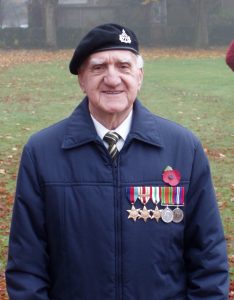 My Dad wrote an all too brief account of his life – especially his time serving in the 46th Recce Regiment in the Second World War. I’m so sad I didn’t sit down with him and talk more about it. In my defense, he didn’t talk about it much as that generation tended not to do so. In fact, those that are most quiet about these things are those that have seen the most. War is a terrible thing. Here’s a very brief extract from a few sketchy notes he made.

Regroup of all 46th Division – sent to (undecipherable) practice landing not knowing next stop. Better not to know. Soon found out. Landed at Salerno. Lots of casualties. Lost all my kit when co-opted as infantry.

Not so good seeing so many dead and some crying for their mothers.

Bike arrived with ship (He was a Dispatch Rider). Great relief.

Lost a good friend in Italy when I took his place taking a message up line. When I returned farmhouse had been shelled and 3 dead. Saw many things too sad and horrible to mention.

Home on leave for 28 days after 2 years 9 months abroad.

There’s a link to a page about 44 Recce where the 46th is mentioned. I have a book somewhere of my Dad’s called ‘Only The Enemy in Front.’ which I’m sorry to say I have not read. Think it’s time to read it! Extracts from that book are quoted on the 44 Recce website. They were under the command of the US Army. This makes sense because I remember my Dad commenting on how they (The Americans) had all the best equipment!

My Dad saw terrible things, and many times providentially, he was spared.

Although he never came to faith in Christ till later in life, he never forgot the fact he was ‘in 1 piece.’ Some see the horror of war and they become Atheists – or so they say. Others, like my Dad, eventually, by the Grace of God become Christians. So when people say about all the evil in the world as an excuse for not believing God – I don’t buy it. And neither did my Dad! Praise God.

The men of that Generation deserve our thanks. Thank you, Dad, for your service, and those that serve and have served in the cause of freedom.

Below are a few extracts from the book. Worth reading.

The first wave of Fifth Army was at sea between North Africa and Salerno when Italy’s surrender was announced. Hitler had anticipated this and German forces moved to neutralise the Italian army. As leading elements of 46th and 56th British and 36th US Divisions came ashore Kesselring had already deployed von Vietinghoff’s Tenth Army to meet them. Resistance was light at first as Vietinghoff held back his forces until he was certain that the Salerno landings were not a feint; then he hit the Allies with two Panzer and two PanzerGrenadier divisions in an attempt to implement Kesselring’s order that ‘the invading army… must be completely annihilated and… thrown into the sea.’

Two regiments of the Reconnaissance Corps were in the Salerno beachhead. 41 Recce with 46th Division and 44 Recce with 56th Division.

On the west coast of Italy, Fifth Army had entered Naples on 1 October but their struggle on the Salerno beaches has been, to paraphrase Wellington, a close run battle. The two British divisions of X Corps which had been in the first wave of invaders had included recce regiments in their orders of battle. In Fifth Army’s situation there was little scope for the normal operations of a reconnaissance regiment and once again it was a case, for 44th and 46th Regiments, of helping to hold a line.

Believing that the Americans were the weak link in Fifth Army, Kesselring tried to drive a wedge between the British and American elements on the beaches. The attackers had the line of the River Sele as their axis of advance for that river marked the inter-Allied boundary in the beachhead.

On D Day, 9 September, elements of both recce regiments had been among the first troops of their divisions ashore