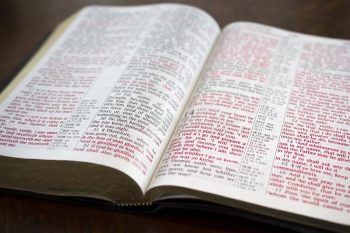 The problem in a nutshell.

I can remember red letter bibles being condemned from the pulpit. The reason is because all of the words in the whole Bible are the words of Christ (God) not just the words that are physically spoken by the Son of God. I’m guessing here, but, the reason for resisting, back then at any rate, was the assaults that came (still do) upon the authority of the Bible. Accepting some words to be more authoritative than other words weakens the authority of the whole. It plays into the hands of thinking how wonderful and loving Jesus is over against a wrathful and vengeful Old Testament God – which is not true. There is no part of the Bible that is more the word of God (or more authoritative) than any other words. The Scriptures are God breathed (2 Tim 3:16). All of them. Every word. Including, of course, the words Jesus physically spoke while on earth.

Apparently there was a Bible with the words of Jesus in the Old Testament recorded in red. That would’ve been better (and interesting) but I assume that didn’t suit the narrative that divides the OT God of wrath from the NT one of love. i couldn’t find a sample of one.

I think it’s possible to take an ever so slightly more nuanced view. I take the Bible for what it is – every word is literally God breathed (2 Tim 3:16). That is, I subscribe to the orthodox view of the Scriptures. The Bible, all of it, is the word of God. But I have come to look on the words of Christ in Red in a slightly different way. Remember, the words in red are the words that the Lord Jesus speaks. Perhaps I should say the words that Jesus speaks, or spoke, while on earth. But I recently had some further thoughts on this.

When we read the words of Christ in red we are reading the words the Son of God spoke while on earth. When I read these words, as we all can, I think of Jesus having a real body with real lungs, with a real voice-box and tongue to be able to incarnationally articulate real words that people could hear him speak. In other words, the red letters point to a real incarnation – not a phantom. A phantom does not speak out real words, or breathe them out into the atmosphere.. So when we speak we need to be breathing. We take in air to our lungs and breath out. Our words are breath. This means the very air that Jesus breathed out is still here on earth! I think this is incredible! I doubt this was the original reason for the words in red and was far more to do with Jesus being more loving (and maybe authoritative).

So then, don’t be overly concerned (if you are concerned) about the letters in red. Use them to speak to your soul of a real bodily incarnated God. ‘Veiled in flesh the Godhead see, Hail the incarnate Deity’

I must admit my mind took a turn after this as I considered that the words in Red also record words that were spoken by the Son of God in a resurrection body. I’m not sure if these are angels on a pinhead but these are some of the things I mused on: If the Son of God was sealed in an airtight room would he still be able to breath since his body had the ability to pass through matter. The amazing thing to consider is that those resurrection words (in red) were spoken by a person with a body. A person with a resurrected body! Not only that, some of the recorded words spoken – in red – are uttered in heaven (e.g. Rev 1:17,18)

Also (bear with me), consider the wounds of The Lord Jesus. The wound in his side, had he not already died (by giving up his spirit), would have been fatal. And yet, he appears to the disciples with visible wounds. We know this because Jesus invites Thomas to put his hand into his side (John 20:27). In some way then, the wounds inflicted on the Saviour are visible and yet not fatal. His body is able to exist with what would otherwise be a fatal wound. This also is evidence of the physicality of The Lord Jesus. There’s a man in heaven, seated on a throne with a visibly fatal wound yet He is not (now) injured or harmed.

The words in red then point indirectly to other facts of the incarnation and of the fact that the Son of God even now has a body. Can you get your head round that? I can’t. These are mysteries indeed.

If such a Bible were to exist it would make for a fascinating edition. It would begin in heaven, then pre-incarnate speech in the OT. Then moving to incarnational speech from a body and then a resurrected body and finally to a fully glorified body in the NT. The culmination will be speech from a fully vindicated body uttered in heaven, by a man, who will say ‘Enter into the joy of the Lord (Matt 25:23).’ What wonderful words these will be. Words spoken by a real man – the man of heaven, and in heaven. How do we enter that place? Not by our own merit but by the wounds that He bore on the cross for sinners that are still visible. We enter because ‘He bore our sins in his own body on the tree (1 Peter 2:24).’ ‘In His own body.’ A body that was on earth!

There’s another way then for us to ‘read’ the red letters in the Bible. The normal way leads to confusion and error. But the way I’m suggesting we could read them, leads to worship and glory to God.

He appeared in a body
Was seen of angels.
Was preached on in the world
Was vindicated by angels (1 Tim 3:16)