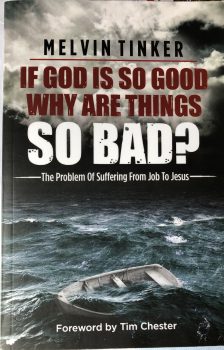 This is the second book I’ve read by Melvin Tinker. It’s published by EP Books and dated 2019 so it’s a recent book. I like the way he writes. That is just a personal preference. The book is laid out nicely with easy to read type with headings throughout each one of its 8 chapters. At 156 pages it’s not a long book, and that includes several pages of end notes (I prefer footnotes), a foreword (by Tim Chester) and a preface. It isn’t a cheap book for its size with a retail price of £8.99 (what I paid), but you’ll probably find it for less.

Tim Chester describes the book as an invite ‘to walk with Job through the confusion suffering creates (p. 10).’ The author writes that ‘What follows iis a series of expositions which attempt to walk the way of wisdom with Job so that we might learn to think and speak of God aright when hard times come our way (p.15).’ As it says on the cover it’s a discussion of the problem of suffering. I have personally found the book of Job to be a great help. Suffering in some shape, mental or physical, will come upon us all and so books that deal with suffering will continue to be produced. Dealing with the problem and dealing with the suffering might be two separate but connected issues. This book does what it says on the tin and deals more with the problem. But it also deals with the suffering in the sense that it equips us to help others rather than batter them as Job’s friends did

One more minor gripe (the other is end notes – worth reading) is that he sometimes, for whatever reason, doesn’t given a reference. On page 49 & 50 he gives a lengthy quote from John Owen and I really wanted to see where it was from – alas, it was not given. He does this in another book as well as I recall. Maybe it’s just me.

Does he answer the question of the book title? You’ll have to answer that. I think he does, but whether you’re satisfied with his answer is another thing. In the Preface Melvin Tinker compares two men, Primo Levi and Victor Frankl, both prisoners in Auschwitz, who survive with two different views. He quotes Frankl saying, ‘The truth is that amongst those who actually went through the experience of Auschwitz, the number of those whose religious life was deepened – in spite, not to say because of this experience – by far exceeds those who gave up their belief (p. 14).’ That is quite telling. To use modern parlance then, Job is a survivor. And we should listen to what his book has to say. As Jesus said ‘He that has an ear let him hear (Mat 11:15).’ 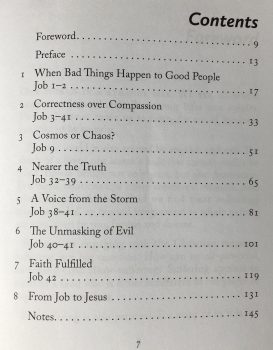 Chapter one introduces us to Job where we see that his ‘religious and moral credentials are established as impeccable from the very beginning (p. 22).’ On page 24 Melvin asks ‘What could possibly go wrong?‘ Job is afflicted as we may know. Satan is given permission to attack Job in the most horrendous manner. And so ‘Here was a man suffering alright, suffering which was heightened, not lessoned, by his faith in God (p. 28).’ Job is set up as one of the good people so ‘how is one to go about explaining what is happening to Job who is one of the good people (p. 28)?’ This is what faces us in the book of Job and what Melvin Tinker seeks to explain in his book.

Chapter two introduces us to Job’s three friends. I believe what Melvin says of them is correct that ‘no matter how crass, misleading and insensitive’ they ‘prove to be, their intentions were nonetheless sincere.’ And then we read ‘In their own way they represent a certain type of Christian today (p.35).’ We may have met that Christian, maybe we are or have been that Christian! The longest section in this chapter has the heading ‘How not to be a ‘comforter’ (p. 43).

Chapter three is a more detailed exposition of Job 9. Here, two profound questions have to be faced. The first question revolves around God’s power and sovereignty and whether he is good? ‘That is the question found lingering on Job’s lips (p. 52).’ The second question is found in Job 9:24 The earth is given into the hand of the wicked; he covers the faces of its judges— if it is not he, who then is it? That is an incredibly powerful question for anyone to ask. If some form of disaster comes into your life ‘if it is not he, who then is it?‘ Melvin discusses this very helpfully, I think, through the rest of the chapter. The materialist really has to face the consequences of how they answer this.

Chapter four sees Elihu step up, Job’s three friends having finished their speeches. Elihu brings a different perspective, suggesting, writes Melvin, ‘that it might be more helpful to look forward to try and identify a purpose in suffering (p. 70).’ it doesn’t mean Elihu hasn’t bought into the retributive principle (p.37), as most people have, but that ‘… it is too narrow a view to think of all suffering as retribution… (p. 70).’

In Chapter five God speaks. The chapter opens with the comment by C. S. Lewis about God being in the dock. Because the book of Job is an ancient courtroom setting Melvin quotes G. K. Chesterton that ‘He [God] is quite willing to be prosecuted (p. 86).’ But ‘God’s defence wasn’t quite as Job had anticipated (p.90).’ The courtroom setting makes sense, and in that context Job’s eventual response fits in with ancient customs. ‘Job finally realised his mistake, which is often ours, namely, to think we are privy to all the facts, when we are not (p. 92).’ Like previous chapters there are helpful testimonies here about how God and His word are known in ways that would have been impossible but for the suffering.

Chapter six explains the Behemoth as death and the Leviathan as the Satan and we are therefore introduced to the reality of death and of supernatural evil. There’s opposition to God and all his works. There’s a war on in the heavenly realm, and we (Christians) are in it.

In Chapter seven I appreciated Melvin’s comment on Job’s end. I mean, it’s a fairy tale ending isn’t it (p. 121, also endnote 3 p. 155). This isn’t a Disney film. Apart from the great loss he sustained materially, all his children were killed. I don’t think it ended with a plastic Christian smile on his face. Why ever do we think it did. There is restoration, but I believe Job’s heart continued for the rest of his life to ache for his dead children. The end is that he meets with God. ‘Job had his hearts desire fulfilled, he met with God. That encounter changed everything, his blessings and his trials, in a new light because he saw God (p. 128).’

In the final Chapter eight Melvin writes, ‘We have been following the trials of one who is ‘victim and hero’; subject to ‘the worst horrors of pain and humiliation,’ the man Job (p. 133).’ We are then taken typologically (and powerfully) from Job to Jesus. As I was reading the book I had confirmed, I think, that the answer to the why of evil has to be found in God himself. I haven’t quite thought all this through but it seems to me that it’s in Christ that we see the why of evil. For me then, the book has been extremely helpful. And the final chapter in particular. At one point I did wonder if I could in all honesty recommend it, but this chapter sold it to me. Here, we are taken to the cross of Christ. This, is where we must all come.

The book is sprinkled throughout with ‘testimonies’ of the suffering that have both rejected God, and those that have found him to be their all in all. I think it would be helpful if you were to read the book (this book, and Job) but most probably will not do that. The question that cannot be avoided though, is where do you find yourself? As the rejector of God? Or the one who finds God in Christ to be their all in all?

This a very helpful book and Christians will find much benefit in reading it. I’m not sure it will answer some of the deeper questions non-Christians might have or even of some Christians (although see above on Ch 8). Some answers will never be found in a book but only in an encounter with God himself. Let’s not forget, that is what happened to Job in the end. His questions – if I can put it that way – weren’t answered by his three friends, nor Elihu, or even Job but by God himself. Books are good, but they aren’t a substitute for meeting with God. There is only one book where God meets us, and that’s his own word The Bible. The book of Job, in the end is in the Bible for that very reason – so we can meet with the living God.