‘Now there were in the church at Antioch prophets and teachers, Barnabas, Simeon who was called Niger, Lucius of Cyrene, Manaen a lifelong friend of Herod the tetrarch, and Saul.’ Acts 13:1

Being a somewhat ordinary person and living in an ordinary station in life, those in high places, to me, inhabit another world. I see the Royal family, the world of the stars (so called), the high-end business world and so many other areas of life that are simply alien to me. I sometimes wonder how these people are reached with the Gospel. Despite all the trappings of privilege and success they are still people that are in need of salvation. It’s highly unlikely in the scheme of things that I would ever have the opportunity to speak with such. Nevertheless, Christians do move in those circles. And I’m thankful they are able to reach the parts people like myself cannot. But it isn’t just those in high places, it’s sometimes the type of people that are in those high places. So, for our encouragement let us consider a man (in the verse above) by the name of Manaen.

We aren’t quite sure of his relationship to King Herod but at the very least he moved in the same circles. The main sense is that of a friend, or even a foster brother. One commentator (Matthew Henry – full quote below) suggests they ‘nursed of the same milk’ or went to the same school. The ESV text (above) says he was a lifelong friend. Let’s suppose that is the case. Who is Herod the tetrarch? This is the Herod that had John the Baptist beheaded. I don’t think we are far off the mark if we call Herod a psychopath. Manaen is a lifelong friend of this Herod. 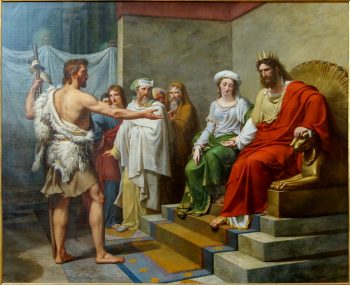 We aren’t explicitly told how Manaen heard the Gospel, or when he came to trust in Christ for salvation, but we do know that John the Baptist preached to Herod. Is it too much of a stretch to say Manaen heard the message from John? And yet two very different responses. Manaen became a prophet and leader in the church and Herod continues, as far as we know, in unbelief – perhaps signifying his eternal destiny.

Why did Herod invite John to his court? John was a novelty to him and a curiosity, but whatever the reason, John didn’t tone down the message to gain favour or be overawed in the presence of the great and the good. That doesn’t mean we have to ‘go at it’ and be aggressive – but it does mean we  have to be faithful and take the opportunities to speak as the Lord presents them to us. Easier said than done of course.

It may even be that Manaen heard the Lord Jesus speak. Either way, whether from John or Jesus, Manaen became a follower of the Lord Christ. I’m not convinced that just because Herod was a psychopath Manaen was a similar character – maybe he was. We simply aren’t told what sort of character he was before becoming a Christian, but we do know something of his life as a believer from our verse above. He became a  prophet and a teacher. Unlikely people do become followers of Jesus. Some even become ministers of the Gospel. Like the Apostle Paul (1 Tim 1:13).

It’s a simple lesson. The Lord has his people sometimes in the most unlikely places. The court of Herod was a place of debauchery and butchery. A place of adultery and licentiousness. And a place of immense privilege. Yet there was Manaen. The Lord doesn’t need us to reach people. But His way is most often to use Christians to speak to people from all manner of backgrounds. Maybe He’ll use us too.

We might think it is futile to pray for some as they seem so far from the Kingdom. But this isn’t the case. Many Christians pray for Boris, for example, even though they will probably never meet him. Or praying for that celebrity, or even a terrorist. God does answer the prayers of His people. No prayer is futile. No one is beyond the reach of God. Acts 13:1 then, is a very encouraging verse – so pray on.

Manaen, a person of some quality, as it should seem, for he was brought up with Herod the tetrarch, either nursed of the same milk, or bred at the same school, or pupil to the same tutor, or rather one that was his constant colleague and companion – that in every part of his education was his comrade and intimate, which gave him a fair prospect of preferment at court, and yet for Christ’s sake he quitted all the hopes of it; like Moses, who, when he had come to years, refused to be called the son of Pharaoh’s daughter. Had he joined in with Herod, with whom he was brought up, he might have had Blastus’s place, and have been his chamberlain; but it is better to be fellow-sufferer with a saint than fellow-persecutor with a tetrarch.