I’ve started listening to The Janet Mefford Show, downloading (Available through iPlayer) to listen on the way to work. I listened for the first time to Dr Oliphint (Covenantal Apologetics) on the show and was pretty shocked by some of the other stuff – particularly the Homosexual ideology and Islam. I was a bit skeptical to begin with, the concern was if Janet was a fundamentalist nutcase. Some of her callers gave me that impression. But I have to say she has some excellent guests and to be honest I now lament afresh the fact there is nothing like it over here in the UK. It would probably be shut down over here as a show that promotes hate speech – even though that’s far from the truth. Disagreement is becoming more and more problematic. I heard via another online broadcaster (not Janet) the term ‘Gaystapo’ for the first time to describe the Homosexual lobby / agenda / ideology. Whilst the term may not be that helpful I think we get the point. Basically, disagree and expect to be dealt with. And it’s really no different when it comes to Islam. The cry of Islamophobe is fairly common here – we had it from the BBC Question Time audience just last Thursday – compete with (measured) applause.

Back to the point of the post. It was on Janet’s show (yesterday I think) I heard an interview with Dr Michael Coffman to discuss his book ‘Radical Islam in the House’. Whether he went too far in his prognosis is hard to say, but if 10% of what he says is true America (Could be too late for us, unless the Lord graciously steps in) seriously needs to wake up – and fast. I know nothing of Michael Coffman but I’m about to order the book on kindle – here’s the blurb below: 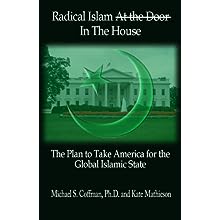 Product Description
Radical Islam In the House exposes the very real Islamist threat to America. It’s no longer lurking at America’s door, it has already penetrated deeply into the federal government and our culture. The over arching goal of the leadership of every major Islamic sect is to create a global Caliphate or world government.

Iran wants to create world chaos to allow the Shi’ite Muslims to form a Shia Caliphate. While allowing Iran to obtain the nuclear bomb will be catastrophic, there is an equally dangerous Islamist cancer that is systematically Islamizing American politics and culture; Wahhabi Islam.

Saudi Arabia’s Wahhabi Islam is the foundation of al Qaeda and the Muslim Brotherhood. Al Qaeda uses violence, while the Muslim Brotherhood uses stealth and deception. By preying on political correctness, they have convinced most Americans they are peaceful, share the same God and want to coexist. While peaceful coexistence may be what the average Muslim wants, it is not true of the Islamic Brotherhood leadership. The Brotherhood has a well-developed, step-by-step plan to turn America into an Islamic controlled nation within a few years as part of their world Caliphate.

Nearly all Muslims believe that the return of the Mahdi, their messiah, is eminent. When that happens he will lead Islam into global conquest and a global Caliphate. This story quite literally leaps off the pages of the Bible in ways non-Jews, Christians and even Muslims will find shocking.

Very few Americans know that Obama’s Kenyan family is steeped in Wahhabi Islam, or that prior to the 2008 election Egyptian TV and radio bragged that a Muslim was going to be president. The implications are stunning and should be understood by everyone — before it is too late.

6 thoughts on “Radical Islam in the House”