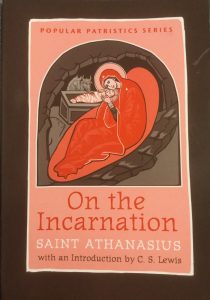 This has sat in my ‘Drafts’ folder for too long. This a brief review/recommendation (with quotes) of On the Incarnation by (Saint) Athanasius (Born: 296 AD, Died: May 2, 373 AD). Frankly, I didn’t know what to expect, but whatever it was I was expecting, this wasn’t it. The book is a total of 110 pages (starts at page 9) with the Preface, an essay by C. S. Lewis on reading older works. This is followed by an excellent, quite lengthy, introduction and explanation by the translator which needs to be read first.

‘On The Incarnation’ itself, is a bit over half the book at ‘only’ 61 pages. But what a half! The way it’s written appeals, I think, to the way my mind likes to work. That makes it a little easier for me to read. But it really isn’t a difficult read at all. In this edition footnotes are rare. There is no index (too short a book really) but there is a list of Suggested Further Reading (ps. 45-47).

Again (like Patrick), what we find here is a fully worked out and functioning Trinitarian theology. I don’t think we should tire of pointing this out given what Muslim friends might believe. Athanasius wrote this work some two hundred years before Mohammed was even born (571). Which means Mohammed did not check his sources and was simply wrong on The Trinity and especially on the deity of The Lord Jesus Christ.

Reading these older works is not a waste of time. We think we’re so sophisticated but forget, or are ignorant of the fact, that older writers have already addressed many of our problems.

Athanasius divides this work essentially into six sections. I don’t know what other editions look like, but in this edition, the work is in numbered sub-sections which is quite helpful. It isn’t endless pages of dense text. This book is Part 2 of his previous work Against the Gentiles, so it dives right in by saying ‘In what preceded we have sufficiently treated a few points from many…(p. 49.)’ The translator deals with Against the Gentiles in the introduction. 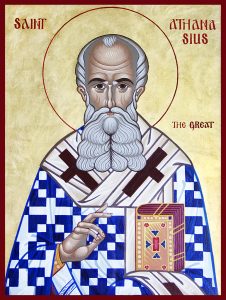 Athanasius begins by showing that the world came into being by nothing other than that God willed it into existence without any pre-existing matter. He also shows how ‘human beings’ were also created by God. But then having sinned and fallen into a state of condemnation he shows how (us) ‘they became insatiable in sinning (p.54).’
On page 55 he then says ‘Therefore, since the rational creatures were being corrupted and such works were perishing, what should God, being good, do?’ Should God ‘Permit the corruption prevailing against them and death to seize them?’
It would have been weakness by God, rather than goodness if having created human beings only to leave them in their corruption. But God had already said to Adam if he were to eat of the forbidden tree they would die. God would be seen to be a liar had He not acted in judgment. So Athanasius writes ‘For it was absurd that God, the Father of truth, should appear a liar for our profit and preservation. (p.56)’ Is that the sort of God we want, a liar? I don’t think so. How could we then ever trust anything He says to us.

Here’s a few more from this sub-section. ‘What then had to happen in this case or what should God do? Demand repentance from human beings for their transgression? He puts it in the form of a dilemma for God. It’s put this way for our understanding. The Scripture never presents God as being in a dilemma. It’s a way of trying to understand the lengths that God will go to rescue human beings. ‘But repentance would neither have preserved the consistency of God, for he again would not have remained true if human beings were not held fast in death….’

What is to be done?

‘Or who was needed for such grace and recalling except the God Word who in the beginning made the universe from non-being? For his it was once more both to bring the corruptible to incorruptibility and to save the superlative consistency of the Father. (p.56).
The first few sections I absolutely loved reading. It made me wonder afresh at the sheer undeserved magnificent grace of God in sending a Saviour. We must also equally emphasise, with His Deity, that Jesus was truly a man, not some kind of illusion or phantom, but a real flesh and blood man. And so:
‘For He was not enclosed in the body, nor was he in the body but not elsewhere. Not while He moved that [body] was the universe left void of His activity and providence. But, what is most marvellous, being the Word, He was not contained by anyone, but rather Himself contained everything.’ p. 66.
Athanasius also writes:
‘When then the theologians (Athanasius specifically means the writers of Scripture) in this matter say that he ate and drank and was born, know that the body, as body, was born and was nourished on appropriate food, but that he, the God Word, present in the body yet arranging all things, made known through the works wrought in the body that he was not himself a human being but the God Word. But these things are said of him, since the body which ate and was born and suffered, was no one else’s but the Lord’s, and as he became human, it is proper for these things to be said of him as human, that he might be shown possessing a real not illusory body.’ p. 68
And further:
‘You must understand, therefore, that when writers on this sacred theme speak of Him as eating and drinking and being born, they mean that the body, as a body, was born and sustained with the food proper to its nature; while God the Word, Who was united with it, was at the same time ordering the universe and revealing Himself through His bodily acts as not man only but God. Those acts are rightly said to be His acts, because the body which did them did indeed belong to Him and none other; moreover, it was right that they should be thus attributed to Him as Man, in order to show that His body was a real one and not merely an appearance.’ p.68.
One of his arguments for the crucifixion, from a human perspective, is at the time of Christ, the worst, the most horrendous death devised by wicked men was crucifixion. I’m paraphrasing but Athanasius says it had to be that way so no one could say ‘well, that was a pretty easy death.’ It was a terrible death! From a prophetic scriptural perspective, this is what was prophesied.

This is a lengthy quote but I think important. (To save typing it up the quote is from another translation – lazy I know. It’s not that different). I hope it whets your appetite to read Athanasius yourself:

“Well then,” some people may say, “if the essential thing was that He should surrender His body to death in place of all, why did He not do so as Man privately, without going to the length of public crucifixion? Surely it would have been more suitable for Him to have laid aside His body with honour than to endure so shameful a death.” But look at this argument closely, and see how merely human it is, whereas what the Saviour did was truly divine and worthy of His Godhead for several reasons. The first is this. The death of men under ordinary circumstances is the result of their natural weakness. They are essentially impermanent, so after a time they fall ill and when worn out they die. But the Lord is not like that. He is not weak, He is the Power of God and Word of God and Very Life Itself. If He had died quietly in His bed like other men it would have looked as if He did so in accordance with His nature, and as though He was indeed no more than other men. But because He was Himself Word and Life and Power His body was made strong, and because the death had to be accomplished, He took the occasion of perfecting His sacrifice not from Himself, but from others. How could He fall sick, Who had healed others? Or how could that body weaken and fail by means of which others are made strong? Here, again, you may say, “Why did He not prevent death, as He did sickness?” Because it was precisely in order to be able to die that He had taken a body, and to prevent the death would have been to impede the resurrection. And as to the unsuitability of sickness for His body, as arguing weakness, you may say, “Did He then not hunger?” Yes, He hungered, because that was the property of His body, but He did not die of hunger, because He Whose body hungered was the Lord. Similarly, though He died to ransom all, He did not see corruption. His body rose in perfect soundness, for it was the body of none other than the Life Himself. p. 71 & 72 in my edition.

I’ll leave it at that. It really is the most amazing book!! I cannot recommend this important work enough. I need, I must, read it again. It’s available in many versions, several, I think on Kindle for a £1. I don’t have the expertise to know which is the best translation and I’m guessing there’s not THAT much difference anyway – I could be wrong. I’ll stick with this one. It was recommended to me by Nick Needham and that’s good enough for me. Thanks Nick.