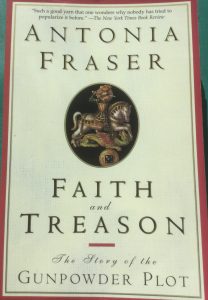 I’d been reading this for a while in between dipping into other books but I have now finished it. It is absolutely brilliant! I thoroughly enjoyed reading this. And I do recommend reading it, not just for the plot itself but to understand the times. I’m not sure who said it but before reading anything from the past you should chant to yourself this phrase: ‘The past is another country, they do things differently there.’ Or do they?

To the book. Faith and Treason: The Story of the Gunpowder Plot by (Lady) Antonia Fraser. I have it in paperback. I bought it used via Amazon. The print is small and dense. There are two sections of pictures – that are great. There’s a detailed index, endnotes (I do not like endnotes), and a list of Reference Books (quite a few). There are also helpful footnotes (thumbs up) throughout the chapters. To be fair, the endnotes are mostly references with only the occasional note, and I scanned through them first so I didn’t need to refer to them while reading. The book is very detailed. She gives a great overview of the earlier reigns to set the scene for the arrival of James 1. In setting the scene though she doesn’t tell us about the St Bartholomew’s day massacre (1572) and I don’t remember any mention of the people Queen Mary (Bloody Mary, Queen in 1552) burnt at the stake. Fifty years or so isn’t that long, so it isn’t surprising sympathy for Catholics from some quarters is lacking.

Antonia Fraser wrote the book in 1996. This is significant. She wrote the book before 9/11 but I’m reading it post 9/11. Reading the book with that in mind the parallels are quite incredible. The author is obviously unaware when of writing and this makes it very interesting to read. I should mention the author is a Catholic. I’ve no idea how committed she is to her faith, but the bias I think is there. I knew this before reading so I wasn’t put off by this at all. She is a brilliant writer. And I think for the most part gives a fair account.

Robert Catesby and his band of terrorists wanted to blow up a mostly Protestant Parliament. That included the King and Queen and their children. Had they pulled it off this would have been a catastrophe for the country. There were to be Catholic Lords in ‘The House’ at the time, friends of his, but this was no deterrent to him. But it would have been uncharted territory and from that perspective, we are left with a lot of ‘what if’s.’ He was a fanatic. Not just any fanatic. He was a Catholic fanatic. He didn’t bring the Houses of Parliament down but he did bring down the wrath of the government and the ire of the King upon the Catholics in the country. The Toleration that Catholics wanted probably would have happened in time. As it eventually did in fact. But their cause had a huge setback.

What did the Government know? In the last chapter, she goes through a few views ranging from a Government plot instigated by Salisbury to complete ignorance. For me, Salisbury knew a lot, but it wasn’t a Government plot. They did need to catch them in the act. And so they caught Guido Fawkes preparing to set the thing off. It seems the powder had separated and might have been useless anyway but who knows.

Some of the questions the book raises are; The Power of The State, Freedom of Religion, Torture, Capital Punishment, and Fanaticism. All the conspirators that were caught were put to death in a horrible way. Father Garnet, the Jesuit leader in England was also put to death but mercifully died at the hanging stage. But here’s the thing about Father Garnet, he did know about the plot. He hid behind the confessional and kept quiet. But he definitely knew beforehand. Here’s something else to think about, should a Priest (or counselor) upon finding out about a crime, or possible crime report it to the authorities? She (the author) dwells upon the Catholic doctrine of Equivocation. (There’s a similar Islamic doctrine – do you get the parallels?) So initially when Father Garnet was being questioned he continued to equivocate. That is, he made it seem he knew nothing. When it finally comes out that he knew, the council rightly ask ‘why did you leave it till now to tell us?’ A fair question. We don’t know if he was tortured. Was Father Garnet, a Jesuit, the instigator of the plot. It was convenient to lay it all at the Jesuit door, but we don’t know. Robert Catesby was (conveniently some say) killed at Holbeach House and so was never questioned.

In the first three pages of the ‘Author’s Note,’ she provides a framework for the book, her aims and some questions she would like to see answered. Assuming the episode is a tragedy (it is) ‘Who was it a tragedy for?’ she asks. Other themes she cites are ‘Terror’ and ‘Terrorism’ thinking primarily of Northern Ireland and the Palestine / Israel conflict with no idea, as I said before, of what was to come. And by terror, she includes the terror of The State. She’s also keen to give a prominent place to women and so, for example, we read a lot about Ann Vaux.

Assuming then, a plot at all, she is ‘… concerned to convey actuality: that is to say, a sense of what an extraordinarily dramatic story it was, with all its elements of tragedy, brutality, [and] heroism …’ You may not, of course, agree with her answers, but whatever point of view you take on The Plot it’s still a brilliant book and a great read – I thought so anyway.

It’s quite a story and full of intrigue. I’m familiar with some of the places which made it more exciting to read. I was in Dunchurch and Ashby St Ledgers last November so I’ll try to post a few pictures.