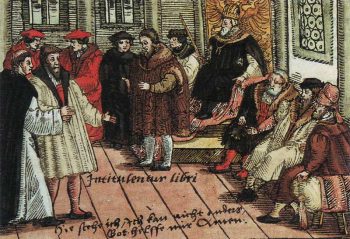 2 I this day appear before you in all humility, according to your command, and I implore your majesty and your august highnesses, by the mercies of God, to listen with favor to the defense of a cause which I am well assured is just and right. I ask pardon, if by reason of my ignorance, I am wanting in the manners that befit a court; for I have not been brought up in king’s palaces, but in the seclusion of a cloister; and I claim no other merit than that of having spoken and written with the simplicity of mind which regards nothing but the glory of God and the pure instruction of the people of Christ.

3 Two questions were yesterday put to me by his imperial majesty; the first, whether I was the author of the books whose titles were read; the second, whether I wished to revoke or defend the doctrine I have taught. I answered the first directly, and I adhere to that answer: that these books are mine and published by me, except so far as they may have been altered or interpolated by the craft or officiousness of opponents. As for the second question, I am now about to reply to it; and I must first entreat your Majesty and your Highnesses to deign to consider that I have composed writings on very different subjects. In some I have discussed Faith and Good Works, in a spirit at once so pure, clear, and Christian, that even my adversaries themselves, far from finding anything to censure, confess that these writings are profitable, and deserve to be perused by devout persons. The pope’s bull, violent as it is, acknowledges this. What, then, should I be doing if I were now to retract these writings? Wretched man! I alone, of all men living, should be abandoning truths approved by the unanimous voice of friends and enemies, and should be opposing doctrines that the whole world glories in confessing!

4 I have composed, secondly, certain works against the papacy, wherein I have attacked such as by false doctrines, irregular lives, and scandalous examples, afflict the Christian world, and ruin the bodies and souls of men. And is not this confirmed by the grief of all who fear God? Is it not manifest that the laws and human doctrines of the popes entangle, vex, and distress the consciences of the faithful, while the crying and endless extortions of Rome engulf the property and wealth of Christendom, and more particularly of this illustrious nation? Yet it is a perpetual statute that the laws and doctrines of the pope be held erroneous and reprobate when they are contrary to the Gospel and the opinions of the church fathers.

5 If I were to revoke what I have written on that subject, what should I do but strengthen this tyranny, and open a wider door to so many and flagrant impieties? Bearing down all resistance with fresh fury, we should behold these proud men swell, foam, and rage more than ever! And not merely would the yoke which now weighs down Christians be made more grinding by my retractation it would thereby become, so to speak, lawful, for, by my retractation, it would receive confirmation from your most serene majesty, and all the States of the Empire. Great God! I should thus be like to an infamous cloak, used to hide and cover over every kind of malice and tyranny.

6 In the third and last place, I have written some books against private individuals, who had undertaken to defend the tyranny of Rome by destroying the faith. I freely confess that I may have attacked such persons with more violence than was consistent with my profession as an ecclesiastic: I do not think of myself as a saint; but neither can I retract these books. Because I should, by so doing, sanction the impieties of my opponents, and they would thence take occasion to crush God’s people with still more cruelty.

7 Yet, as I am a mere man, and not God, I will defend myself after the example of Jesus Christ, who said: “If I have spoken evil, bear witness against me; but if well, why doest thou strike me?” (John xviii:23). How much more should I, who am but dust and ashes, and so prone to error, desire that every one should bring forward what he can against my doctrine. Therefore, most serene emperor, and you illustrious princes, and all, whether high or low, who hear me, I implore you by the mercies of God to prove to me by the writings of the prophets and apostles that I am in error. As soon as I shall be convinced, I will instantly retract all my errors, and will myself be the first to seize my writings, and commit them to the flames.8 What I have just said will, I think, clearly show that I have well considered and weighed, not only the dangers to which I am exposing myself, but also the parties and dissensions excited in the world by means of my doctrine, of which I was yesterday so gravely admonished. But far from being dismayed by them, I rejoice exceedingly to see the Gospel this day, as of old, a cause of disturbance and disagreement; for such is the character and destiny of God’s word. “I came not to send peace unto the earth, but a sword,” said Jesus Christ. “For I am come to set a man at variance against his father, and the daughter against her mother, and the daughter-in-law against her mother-in-law; and a man’s foees shall be those of his own household.” (Matthew x:34-36)

9 God is wonderful and terrible in His counsels. Let us have a care, lest in our endeavors to arrest discords, we be bound to fight against the holy word of God and bring down upon our heads a frightful deluge of inextricable dangers, present disaster, and everlasting desolations. Let us have a care that the reign of the young and noble prince, the Emperor Charles, on whom, next to God, we build so many hopes, should not only commence, but continue and terminate its course, under the most favorable auspices.

10 I might cite examples drawn from the oracles of God. I might speak of Pharaohs, of kings of Babylon, or of Israel, who were never more contributing to their own ruin than when, by measures in appearances most prudent, they thought to establish their authority! God removeth the mountains and they know not (Job ix:5). In speaking thus, I do not suppose that such noble princes have need of my poor judgment; but I wish to acquit myself of a duty whose fulfillment my native Germany has a right to expect from her children. And so commending myself to your august majesty, and your most serene highnesses, I beseech you in all humility, not to permit the hatred of my enemies to rain upon me an indignation I have not deserved. I have done.

[Having delivered this speech in German, Luther was now asked to repeat it in Latin. After some hesitation, he did so. He was then reminded that he should answer a simple question: whether he would retract or not. Thus he continued:]

11 Since your most serene majesty and your high mightinesses require of me a simple, clear and direct answer, I will give one, and it is this: I cannot submit my faith either to the pope or to the council, because it is as clear as noonday that they have fallen into error and even into glaring inconsistency with themselves. If, then, I am not convinced by proof from Holy Scripture, or by cogent reasons, if I am not satisfied by the very text I have cited, and if my judgment is not in this way brought into subjection to God’s word, I neither can nor will retract anything; for it cannot be either safe or honest for a Christian to speak against his conscience. Here I stand; I cannot do otherwise; God help me! Amen.

(Source for the above.)