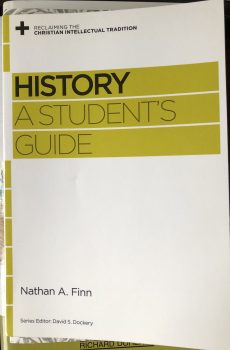 History: A Student’s Guide by Nathan A Finn, Crossway, 2016. This is part a series called ‘Reclaiming the Christian Intellectual Tradition.’ I came across this book through a casual reference by Michael Haykin on Facebook. So, thank you Michael, I really enjoyed reading it.

I’m not going to be pursuing any career, let alone a career in history, so the book has no relevance to me in that regard. But if you are at the beginning of your further education or are considering a change where studying history is a requirement or especially if you are a Christian studying for a degree in history, then you should read it. Typically, it would probably be found in a university book store. I can’t really recommend the book for general reading because it probably isn’t meant to be used in that way. But if you are so inclined then do read it. Ministers / Pastors would probably find it helpful. Also, check out the other books in the series.

Presentism. This absolutely plagues our world today. Here’s the Glossary entry, ‘Presentism: Any attempt to read present assumptions back into the past.’ We see this in shedloads today. It is like an epidemic. It is abhorrent. Every historian will know the quote from L. P. Hartley even if they haven’t read the book. Nathan quotes it on p.29 “The past is a foreign country; they do things differently there.” He also points out this applies to the recent past as well, and not just to ancient history. In the strongest possible way I can, dumping present morals on the past is not only dangerous, it is also stupid.

Providentialism. This was quite an interesting discussion. This is the way Christian Historians (can) see the hand of God working in or through history. God is clearly working in history and the world is on a linear path to its end, and if it were not for God there would be no history at all. But reading the hand of God into a particular event, for good or ill, is notoriously difficult. God has chosen to make his revealed will known only through the Scriptures. Perhaps as an example of Providentialism, I read a book on Machiavelli where Savonarola is given a fair bit of space. Some Christians (BoT) read back into Savonarola a ‘Revival of Religion.’ I’m afraid I don’t. It’s a lovely thought but I really don’t see a ‘Revival’ there. Not in the same sense as we see in the Evangelical Awakenings of the 18th Century anyway. You may disagree – which is fine.
The point being, care is needed with any attempt at reading God working in the past. We also need to be charitable as not all Christian Historians will read providence in the same way. Later in the book Nathan does urge Christian Historians to make judgments in the present by using the past – but carefully.

Providentialism is a slightly different point to what is dealt with in Chapter 2 on ‘Historical Interpretation.’ Nathan lists five interpretive grids. One of these is the Marxist view. He Mentions Christopher Hill in the book. Here’s an amusing anecdote. I wasn’t there unfortunately, I couldn’t make it, but a friend was. Professor Hill visited a school in Rugby (my home town – born & bred) to lecture on an aspect of the English Civil War. One questioner asked something like, ‘Professor Hill, how would a Marxist interpret the Civil War?’ to which he replied ‘What do you think I’ve been doing for the last hour.’ There you go. It isn’t always obvious, and we should definitely not throw everything out because they (other historians) have a different worldview. Discernment is required.

Usefulness to the Church. He means here, not just The Church, but the local church. While at secondary school we had a history exam where I scored -1 (minus 1). And that wasn’t the lowest score either! History had absolutely no relevance to me at all. Plus, the History Teacher (Mr Baldwin) was a sadist – I exagerate. But he did like to lift boys up by their sideburns and give them a twist on the way up. It didn’t endear me to the subject. What changed? God intervened and a love of history was kindled almost straight away – with the help of Peter Jeffery, my first Pastor.

My experience over the years has shown that although some Christians have an interest in history – churches as a whole don’t. It’s a great shame. Your church might be blessed to have an historian as a member, though I’m sure many do not. But if your church does, or you are an historian, Nathan gives some suggestions how historians might be useful in the local church. Here’s three:

Not the normal book I review. More could be said. Hope it has been helpful.