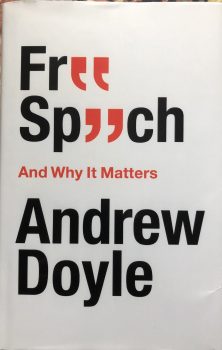 Free Speech And Why It Matters by Andrew Doyle, Constable, 2021. £7.32 on Amazon at the time of writing.

It’s a hardback just a bit smaller than A5. 134 pages total. An easy to read type, a notes section and even an index. Think I would’ve preferred footnotes but it kind of works. I ended up reading the book and then read all the notes, which were actually worth reading. He uses a lot of fancy words I’ve never heard of, but then he does have a Doctorate in Renaissance Literature from Oxford. As you would expect then, the book is well researched and referenced. Like I say, the Notes really are worth reading. For example:

‘In an address to the House of Commons in March 1763, William Pitt the Elder (1708-78) recognised that the home is a sanctuary for every citizen in which in which even treasonous sentiments might be safely expressed: ‘The poorest man may in his cottage bid defiance to all the forces of the Crown. It mat be frail, its roof may shake, the wind may blow through it, the storm may enter, but the King of England cannot enter. All his force dares not cross the threshold of the ruined tenement.’ p. 123, note for p. 89.

And if you know what’s happening to friends North of the Border you’ll know the relevance of that quote. As indeed does Andrew Doyle.

Early on in the book he takes a bleak view of Savonarola and his ‘Bonfire of the Vanities.’ This in the chapter titled ‘The Self-Censuring Artist.’ What Andrew doesn’t tell you is that Savonarola was going up against, through action and speech, the psychopathic Pope Alexander and his equally psychopathic Cardinal son Cesar Borgia (Duke Valentino, AKA The Prince). By speaking out against the Pope, Savonarola wasn’t long for this world. Maybe Andrew should really have been supporting him. I guess we’ll never know.

The book has 18 chapters so they are all quite short. I thought this worked well.  It’s easy to pick up and put down. I didn’t think there were any wasted words. The chapter ‘A Thought Experiment’ was interesting. Andrew chose Christian opposition to homosexuality for his experiment. It felt quite personal so I checked to see if Andrew is a homosexual – which he is. I must admit knowing that did slightly change how I read the book. Not enough to put me off it though. Correct me if I’m wrong, but I would see him as quite opposed to the Christian faith, but he wouldn’t want to lock me up for expressing the view that homosexuality is a sin. For the record I would’t want to lock him up either. I wish him no ill – at all. In the realm of Free Speech, he, along with Douglas Murray and Peter Tatchell are allies. Friends even.

As for the book, yes, it’s helpful. He perhaps makes for a surprising ally.

Like so many, Andrew wants to have an objective truth, because that is the only rational option, but then wants to have a relative view of it where it suits. You can’t have both. Nevertheless I’m grateful that common grace forces him, and those like him, to operate within a Christian Worldview, even for those that oppose it. It’s truly amazing how even the godless can end up praising God. It’s quite amusing really.

Do I recommend it? Yes I do. In fact, the way it’s written and its size makes it a handy reference book. So I may well read it again. Like me, you probably won’t agree with everything he writes. We don’t have to support his worldview, but we can support him.

As Christians we should support Free Speech, even if that means unpleasant speech, or speech that is directed at us. And there is plenty of that! There is one who judges our speech, and our prayer is that our speaking the Gospel freely will bring those who at the moment are opposed to The Lord Jesus, into His Kingdom, and then to speak FOR Him. But we don’t do that by banning the free speech of others, even those that are vehemently opposed to the Christian faith.