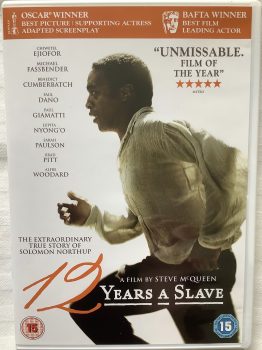 The other evening I watched ‘12 Years a Slave’ for the first time. It’s a film I have wanted to watch since it was released in 2013. But somehow never got round to watching it.

The film was released before BLM came on the scene but watching it now seemed in some ways a better time to see it. I note the Director is Steve McQueen. Not that Steve McQueen. It’s a fantastic film. A beautiful film. A believable film. But it’s a deeply harrowing and distressing film, as it ought to be.

The first thing I noticed was the year. The film starts and is set in 1841. There’s no back-story of how Solomon Northup achieved the high standing he obviously has. He’s treated well as a man of money and of influence. He is married with two children with a very nice house. He’s doing well.

They obviously wanted us to note it, but I noted the date because I thought the slave trade had already been abolished in Britain by 1808 (1807 in the US). By 1841 the British navy was engaged in preventing slavery. That is, they were boarding ships and literally freeing slaves. Or so I thought. On reading a Guardian article yesterday it turns out we (Britain) weren’t engaged in abolishing it after all but merely trying to put its abolition off. We must be careful we don’t re-write history to fit our own ideology (that cuts both ways of course). It wasn’t perfect, but it was a good start. The way some people write it’s as if we haven’t moved forward at all. I don’t have any books on the slave trade (maybe I should), but I did check my dates in America: A Narrative History, 4th Ed, Tindall & Shi, W. W. Norton, 1997, pp. 248, 394-95, 437-43. ‘In 1841 the British prime minister asserted the right to patrol off the coast of Africa and search vessels flying the American flag to see if they carried slaves (p. 394).’ (It’s worth watching this lecture by Simon Schama.)

The thing I noticed (Unless I missed it) was that Solomon (the main character) never or rarely engages in attacks of bitterness towards the white folks. He defends himself for sure, but all the time he seeks to have good relationships with the white folks. He doesn’t give up on that as we eventually get to see.

As I watch I make comparisons with The Holocaust. A couple of weeks ago I watched a film about Dietrich Bonhoeffer and his opposition to the Nazis. He made that comparison after visiting America where he ministered in a Black church. Bonhoeffer was executed just before the end of the war. At least the black man had some value.

I’m only going to comment on the white characters ((Someone else can comment on the black folk). They are a mixed bunch caught in that time in history. But it’s exactly what we find now. We’re a mixed bunch. It starts with a shop keeper. He respects Solomon’s money for sure and there seems to be a good relationship. Then there’s the two wicked deceivers that sell him for money. Then several appalling characters until the plantation owner played by Benedict Cumberbatch. He wants to do right but is trapped (imprisoned in the system?) and ends up continuing to condone slavery. Several evil men and women follow. Then we meet the man played by Brad Pitt. He ended up being Solomon’s deliverer. Notice Solomon builds a relationship with Pitt’s character. But also notice, he (Pitt) realises that he’s putting himself in danger for Solomon by going against the system he’s living with (sound familiar?). But he does it anyway. Notice it’s a white man that Solomon sends for. Why? Because he knows he will come for him – probably at great risk I might add. What relief as it soon follows that Solomon’s nightmare ends and he’s reunited with his family, including a son-in-law and grandson. It’s incredibly moving. We shouldn’t forget emancipation for thousands never came.

I find these films stir within me a deep sense of justice that rises up. I can get quite wound up. I want justice to be done and wrongs righted. Reading the notes at the end of the film Justice is not done. It’s a travesty. I know that. Some, most, injustices in this world will never be righted. There is a day coming though when justice will be seen to be done. A righteous judgement will take place when the Righteous Judge of all the earth will bring this corrupt sinful world to an end.

I know he was in a privileged position in the film but don’t you think we should all follow the example of Solomon in the film. We are not in 1841. Yes there is still improvements to be made. But things have moved forward a lot.

Zoom foreword to 2020. The conclusion I come to after watching the film is that the Black Lives Matter organisation could not care twopence for an improvement in relations between ethnicities. They are only interested in maintaining conflict and in reality (may) put any improvements made back 30 years or more. They just want to engage in blame (and have their own agenda by the way).

Those are a few of my thoughts after eventually watching the film.