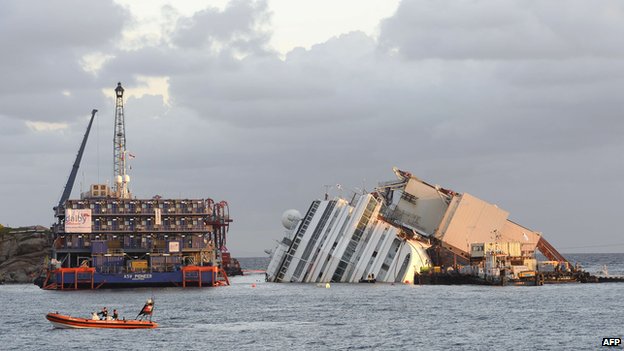 This story on the BBC is typical of a news event used to illustrate spiritual truth. This particular story jumped out as an excellent illustration of salvation.

Here’s a number of points to how it might be used:

1. A disaster has taken place. A great verse that speaks to this – and works very well here – is this one: ‘See, this alone I found, that God made man upright, but they have sought out many schemes‘. Ecclesiastes 7:29 (ESV). In other words, man is no longer upright. He has been brought down. Such a mighty glorious vessel now lies helpless on its side. And if memory serves well, the blame was laid squarely on  the shoulders of the Captain. The Captain was responsible not the crew or the passengers. The Captain tried to divert blame to someone else but he was found out. At least 30 passengers died when the ship capsized.

3. A Rescuer has come. To make the Concodia upright is described as follows: ‘One of the largest and most daunting salvage operations ever undertaken is under way with an attempt to pull the shipwrecked Costa Concordia upright’. I’d disagree with that. The redemption, the rescue of man out of sin is the ‘most daunting salvage operation ever undertaken’. Never was there such a rescue required as the rescue of a sinner.

4. There’s already a hefty price tag, and it’s not over yet. At the end of the report we read, ‘The salvage project has so far cost more than 600m euros ($800m; £500m) and is expected to cost a lot more before the operation is complete’. The planning, the resources and the cost for such an operation is huge. But this is nothing compared to the rescue of a sinner. The salvation of a sinner cost the death of Jesus on the cross. And to get a true perspective of the cost it’s necessary to take some time out and consider just who Jesus is and what it cost to leave heaven, take on the form of a servant and then die.

5. It will be re-floated. It will rise again. As with all illustrations, it’s not perfect. But the following – and final – quote from the news story can be read two ways: ‘Our correspondent says that only after the ship is back up on her keel will it be possible to inspect it fully and begin to plan the next stage – the effort to repair and re-float it – and eventually tow it away to be destroyed.’ Those that have trusted in Christ will rise in Christ to be gloriously re-floated and restored, not just to a former glory but to a greater glory.

Where He displays His healing power,
Death and the curse are known no more:
In Him the tribes of Adam boast
More blessings than their father lost.

But for those that have rejected Christ and spurned His cross and His Salvation; they will also be re-floated only to be towed away and destroyed. And lest as a Christ rejecting sinner you should think destruction a good thing – when you’re dead you’re dead – the Bible never speaks of destruction as an end of being, but as a loss of well-being, only to at the last be cast into hell for all eternity to endure the ultimate loss of conscious well-being.

There’s loads more in this story, but the message is clear, Seek Christ and His Salvation as the ONLY Saviour and rescuer of sinners.